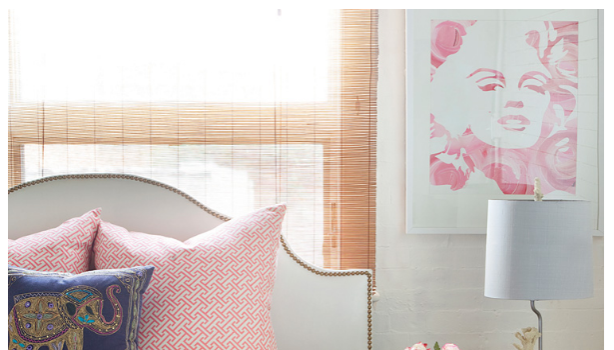 An Urban Loft Design Stirs the Senses with Pops of Color

When decking out her former digs in Philadelphia, Pennsylvania, Naomi Stein was definitely ahead of the curve with her alternative style choice that she calls modern bohemian glamour. “I’ve always loved a collected feel with some things that are new, some things that are old, some traditional, and some modern,” says the creative director for Ardmore, Pennsylvania-based Design Manifest.

Stein learned about the home design industry early on from her father who owned a construction company. But her 1,400-square-foot, open-concept loft wasn’t a custom build; it was a rental, which drove a lot of her design decisions. While working within the guidelines of what could be altered in the bachelorette pad she shared with her beloved pug, the designer also had to find the best way to divide and conquer the wide-open space, which she did by creating different zones and vignettes to give each area a purpose and to make it feel cozy. Carefully planned furniture placement and guided pops of color helped establish each section of the loft. For example, the cheerful office nook was inspired by her penchant for pink and blue, which made it feel like a separate room. “To me, it feels happy and vibrant and energizing, and it’s not so serious,” says Stein. “There’s a purposeful clash, where matching would be more formal. I just wanted it to feel loose and free, so I tested the boundaries with the blue wall behind the pink desk and the stools that really didn’t go.”

“In nature, things don’t match, so I tend to use that theory. I took cues from real-life elements that still look great together and let you have a little more room to experiment,” she adds. “I love a mix of textiles, styles, colors, and patterns. Going room to room is easier to mix, but when the eye goes to everything at once, it’s important to be cohesive. You literally could spin around the room and see everything.” 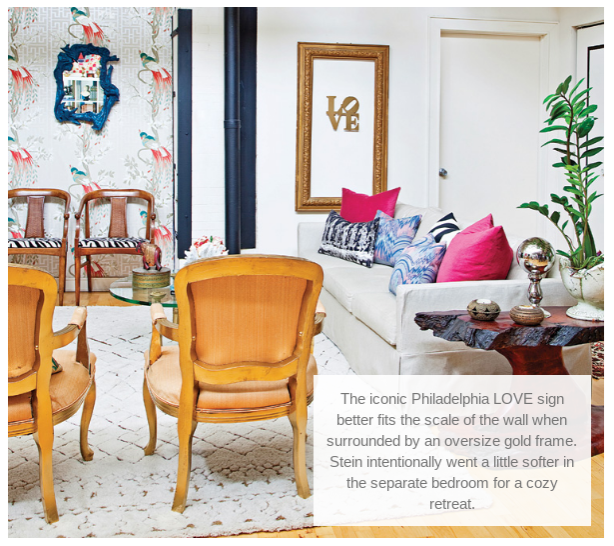 To capture the bohemian vibe, she relied on suzanis and ikats and other colors and patterns that provided the look she was after with a slight twist. “That’s the beef I have with bohemian. It often looks very casual, not tailored,” says Stein. “I wanted cleaner and fine pieces to balance it out. I wanted it to be layered and collected, but also really edited, so it was both a soothing and a vibrant place. I wanted serenity in there.”

Shopping from the heart gave her a great starting point. “It’s why I buy pieces I love; they always have a home. I went through a phase where I was really into furniture auctions so I would scoop up great vintage pieces like the coffee table and the gilded French upholstered chairs,” says Stein who added items from Craigslist and Ikea along with a few high-end finds like her custom sofa. “I had things that were collected over time, so once I was in the space I knew what I wanted to keep an eye out for to see what would work,” she says. “It’s really important to live in a space for a bit to see how you use it. That way you’re more prone to enjoy it.” 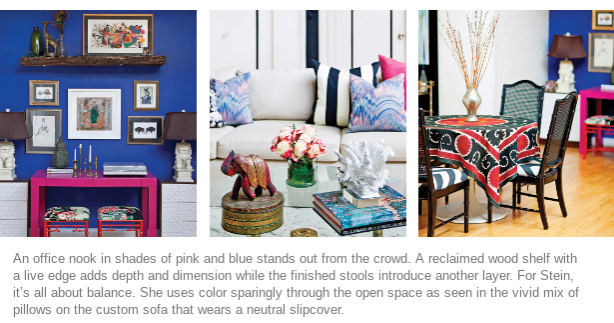 Her art collection evolved as well. “I have a fantastic grandmother who has great taste,” says Stein about family heirlooms like a framed Victor Vasarely scarf and a vintage painting of colorful ladies by an unknown artist. The art above the desk came from thrift stores while the iconic Philadelphia LOVE sign was a gift from a friend. As for the skillful mix of textiles, many were scraps gathered through the years and some feature classic black-and-white patterns. “It’s a really colorful place, but there’s not too much color,” she says. “I was cognizant about balance. In a grand space, I wanted a little color to go a long way instead.

The lively environment was certainly big on style. “French meets Asian meets Moroccan–that, to me, is bohemian; hopefully in a way that is pleasing and not jarring to the eye. The overall response has been incredibly receptive,” she says. Her magical makeovers include a driftwood mirror in a vivid shade. “It didn’t have the compelling look I wanted, so I spray-painted it teal,” says Stein. And the TV cabinet is actually two Ikea nightstands in disguise thanks to some paint and new hardware.

Allowing the loft to come together over time was a wise decision. “To be able to sit in the space and be in the space helped translate to furnishing the space. I’m always encouraging clients to do the same,” says Stein who does what she calls a three-quarter install so clients can see how a home feels before deciding on the final quarter. “It feels more collected, more comfortable, more you.”